When it all started in 2002 in a small workshop in an industrial zone of Ankara, the capital city of Turkey, it counted only 4 as its employees, a far cry from its current count of around 500 employees. Today E-Berk aptly fits into the description of “the TBM (Tunnel Boring Machine) Tunneling Specialist”, but in those beginning days, its product range would barely fill a one-page sales brochure: Disc Cutter Rings. But that was then. What started as a mere cutter ring production in 2002 has now reached to a full spectrum of products ranging from production of TBM cutting tools, TBM spare parts, TBM back-up units to services like TBM revisions. E-Berk, combining its innovative products with flexible production techniques, has successfully broken into the markets traditionally dominated by big-name TBM producers.

Today it is a pretty good move for the career of a purchasing manager or a site engineer to opt for E-Berk cutting tools rather than the “safe choice” those of the big-name TBM producers. With exports to 24 countries so far, E-Berk can name more than a hundred tunneling projects which utilized its products. To name a few, Moscow metro, Istanbul metro, Warsaw metro, Doha Gold Line, Mecca-Riyadh metro, Mumbai metro, Chennai metro, Minsk metro, Paris Rennes Lyon railway tunnels, Bucharest metro, Sofia metro, Shanghai Huangphu river tunnel as well as the prestigious project of Bosphorus tunnel connecting the European and Asian sides of Istanbul, all used E-Berk cutting tools.

Building on its experience over TBM spare parts and TBM revisions, it was only natural that E-Berk would eventually aim at a higher place in value chain of TBM tunneling. But in true E-Berk fashion, it wouldn’t just do so. At least, not before really understanding the user experience in operating TBMs. When, a few years ago, the company management set its direction towards developing the E-Berk TBM, the first decision taken was to operate TBMs in real tunneling projects to discover the potential innovation points in TBM tunneling. The company took over 3 TBM tunneling projects as sub-contractor, ranging from 3-5 meter diameter water tunnels to a 8 meter diameter railway tunnel. More than half of the R&D engineers were moved to tunneling sites literally relocating the R&D department deep into the tunnels.

More than the metal, it is the software

A few years passed and the outcome is the first E-Berk TBM: E-3301 introduced on May the 10th. The launch of E-3301 with a ceremony, attended by Turkish Government ministers, has attracted a lot of interest from the public and private companies alike, as it also happened to be the first Turkish-made TBM. Turkey has now become one of the 8 countries in the World producing TBMs. Being Turkish-made is significant, also because it will now on help prevent Turkey being the dumping ground of the second hand refurbished TBMs. Turkey is a very mountainous country with a lot of tunneling projects planned.

The 3,25 meter diameter E-Berk E-3301 undergoes its final checks in company’s newly built TBM factory in the outskirts of Ankara, before it will be lowered into a tunneling shaft in Tekirdağ, a city in the European part of Turkey. As a dozen R&D engineers run around the huge hangar housing E-3301, the company is very secretive about its exact specifications other than the standard stuff like its torque, trust, engines etc. They only reveal that the main innovation is driven by the software. A female R&D engineer is quick to point out that the software is not the only innovation but the main force, the one more than orchestrating other innovations.

When we meet E-Berk’s CEO Özgür Savaş Özüdoğru, the flamboyant founder of the company in his early 40s, he is busy reviewing the simulations of various operational cases on a big computer screen together with a couple of engineers. Not eager to talk about the specifics of the E-3301, Mr Özüdoğru, dubbed the “Elon Musk of TBM Tunneling”, instead reveals how E-Berk aims to attack what he calls ‘Legacy TBM manufacturers’ in well-established TBM market: “In this market, and actually in any market, you must either have a strong brand or you must innovate. Ideally you can have both but it rarely happens because the legacy TBM manufacturers have no urge to innovate. They already own the market and they can sell what they already have. Why would they spend money on R&D to innovate? But if you are not one of them, then there is only one way to enter that market: Innovation. We have a pretty strong brand in TBM cutting tools and spare parts but it will be foolish to produce a TBM mimicking TBMs of legacy manufacturers and then expect the buyers to flock in. We have to earn our name in TBMs just the way we earned it in TBM cutting tools and spare parts”.

Özüdoğru goes on explaining why they succeeded as a relatively newcomer:“Take the TBM cutting tools market. When we entered the market, legacy TBM manufacturers would sell the TBM and then would sell all the cutting tools during the tunneling project. A lot of it actually. It was all granted. They would charge whatever they wanted and nobody really measured or cared how long those cutting tools lasted or how effective they were. It was like “Nobody gets fired for choosing IBM”, to give an example from computer business. Choosing the cutting tools of a legacy TBM manufacturer was a very safe choice. Even if things went wrong, even if the cutting tools lasted a few meters, nobody got fired. Not only that, legacy TBM manufacturers were able to sell many more cutting tools that way”. Özüdoğru, a Metallurgical Engineer graduated from respected Istanbul Technical University says they succeeded by innovating: “There was no way we could compete by selling at lower prices. In a typical tunneling site you have around 100 people working, not to mention equipment worth many millions of dollars. Imagine boring is interrupted for a few hours because a purchasing manager tried to save a couple of hundred dollars by buying cheap cutting tools. No, it would never work. Instead we chose to innovate. Even when we were a 4-people company, we have always searched for ways how we could make our product dig more and last longer. Yes in the beginning we had to give away a few discs free for trials. But today, without any advertisements, we are the choice of the major tunneling projects across the globe. It is simply mouth to mouth advertising. Often we receive from site engineers the photos of cutter heads showing the legacy TBM manufacturers’ discs worn misshaped while ours pretty intact. This is exactly the way we will follow in TBMs as well: Innovate and disrupt!”.

Time will show if E-Berk will manage to disrupt the TBM market as it did in TBM cutting tools market. 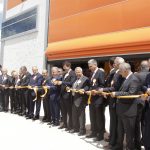 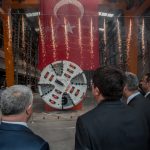 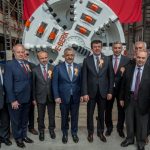 This web site is supported by Turkish Machinery Group